Nobel prizes: only 49 times awarded to women in 115 years 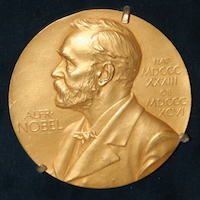 Sveva Avveduto, Ilaria Di Tullio, members of the GENERA consortium write about their reflections on this year's Nobel prize awards.

Since 1901, when the Nobel Prize Ceremony was established in honour of the Swedish inventor of the dynamite Alfred Nobel, 579 prizes have been awarded to 911 candidates, with only 49 to women scientists: two for physical science (Marie Sklodowska Curie and Maria Goeppert Mayer), four for chemistry, 12 for medicine/physiology, 14 for literature and 16 for Peace[1]. This gender disparity is shown in Figure 1.

In 2016 Nobel Prize has been awarded exceptionally to four women, 3 for science and 1 for literature[2].

The ‘Noble’ gender gap is also present the composition of the Nobel committees responsible for the selection of candidates. The committee for the prize in Physics based at the Royal Swedish Academy of Science,is composed of 6 members with only one female, Olga Botner, Professor of Experimental Elementary Particle Physics.. The Committee members are elected for a period of three years from among the members of the Academy. It is not surprising the membership of the Academy in the physical sciences is predominantly male and so the likelihood of having more than one woman at a time on the selection Committee can only be achieved if more women are accepted to the Academy.

Perhaps, Sweden can achieve this: the Government has openly described itself to be feminist, and there is systematic effort to integrate gender mainstreaming in academia and public bodies, implemented by the Swedish Secretariat for Gender Research. Their Guidelines for Gender Mainstreaming are available at www.genus.se.

GENERA (Gender Equality Network in European Research Area) is a European project whose main aim is to support research preforming organizations (RPOs) and research funding organizations (RFOs) in Physics and related areas in implementing Gender Equality Plans. Historically, the proportion of women entering, remaining and succeeding in Physics has been disproportionally low compared to men, and worse from almost any other field of science. One of the questions that the 12 strong GENERA consortium[3] wants to identify is: why the gender imbalance in Physics has been so difficult to improve and what can the GEPs implemented by RPOs and RFOs in Physics practically achieve so more women can reach leadership position and can be invited to join top-level decision making positions, including in the Nobel Prize selection committees of the Royal Swedish Academy of Sciences.

If we are resolute in our objectives and do not give in to doubts, so well described by the French poet, Edmond Rostand, when he said: “My heart always timidly hides itself behind my mind. I set out to bring down stars from the sky, then, for fear of ridicule, I stop and pick little flowers of eloquence”, then the status quo in how Physics recognises and rewards scientific merit of women and men will change.